You are using an outdated browser. Please upgrade your browser to improve your experience and security.

Question: True or False: Two current VFL/AFL teams were once known respectively as the Fuchsias and the Mayblooms.
Answer: The Melbourne Football Club, now known as the Demons, was once called the Fuchsias. The Hawthorn Hawks, a modern-day powerhouse of the competition, were originally known as the Mayblooms.

Question: True or False: The highest attendance ever recorded at a VFL/AFL Grand Final was 121,696.
Answer: The 1970 VFL Grand Final was played between Carlton and Collingwood at the world-famous Melbourne Cricket Ground (MCG). This record can no longer be broken, as the stadium’s capacity has been reduced owing to occupational health and safety regulations.

Question: A catch that is taken after the football has been kicked at least 15 meters is known as a ____.
Answer: In Australian rules football a mark is a skill in which a player cleanly catches and securely holds on to a kicked ball that has traveled at least 15 meters without anyone else having touched it and without the ball having hit the ground. Along with kicking the ball, marking is one of the most prevalent and spectacular skills in Australian football.

Question: What is the derogatory term regularly used by Aussie rules supporters when describing the umpires?
Answer: As in many other sports, Aussie rules umpires are held in low regard by many supporters. The nickname “maggot” came about because umpires traditionally wore an all-white uniform. Umpires now wear a range of colored uniforms, but the nickname remains very popular.

Question: True or False: When a football hits a player in the face or head, he or she is said to have had a “bad case of leather poisoning.”
Answer: Being hit by the ball in the face or head is known as a “falcon.” Having “leather poisoning” is a complimentary colloquialism for a player who has had lots of kicks, marks, and hand passes during a match. Such players are also called “ball magnets.”

Question: True or False: Every Australian state and territory has a representative team in the AFL.
Answer: Despite having supplied countless champion footballers over the years, neither Tasmania nor the Northern Territory nor the Australian Capital Territory has its own AFL team yet.

Question: An Aussie rules fan or supporter is also known as a ____.
Answer: While there is still disagreement over the origin of the term, a “barracker” is one who cheers or shouts encouragement for one’s team.

Question: Which legendary singer received universal condemnation for his performance as the headliner at the 2011 AFL Grand Final?
Answer: Said to have received about $500,000 for a 12-minute show, Meat Loaf later apologized to his fans for his performance.

Question: True or False: The highest number of NFL (American gridiron football) games played by a former AFL player is 159.
Answer: Former AFL player Darren Bennet played in the NFL for the San Diego Chargers and the Minnesota Vikings.

Question: What is the highest number of goals scored by a player in a single VFL/AFL match?
Answer: Melbourne Football Club’s Fred Fanning kicked 18 goals against the Saint Kilda Saints in 1947. 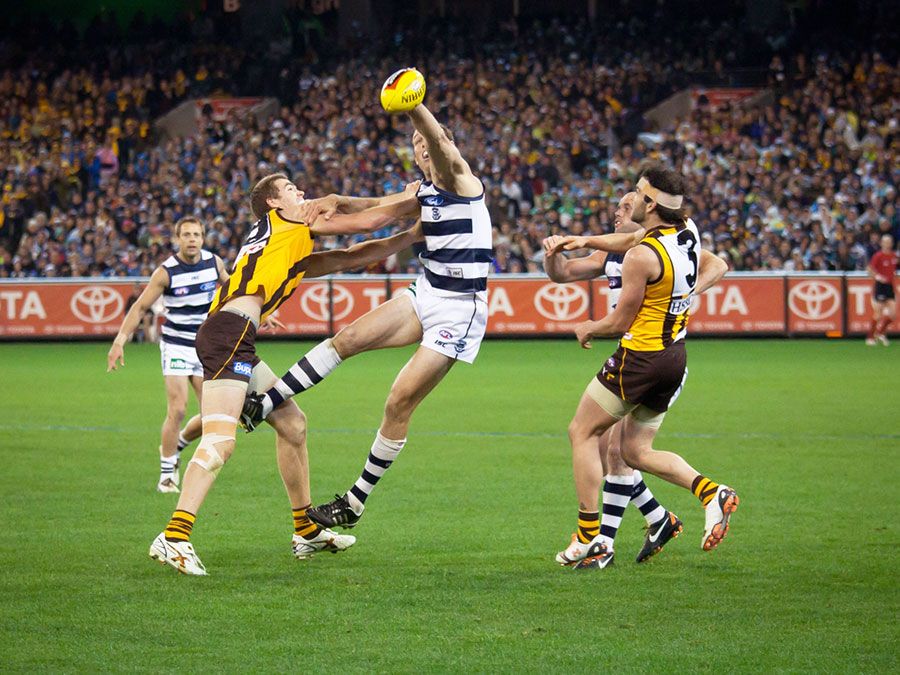 Dating back as far as the 1850s, Australian (Aussie) rules football is a hugely popular sport that is unique to Australia. Although its origins are a little unclear, it is widely believed that the sport was invented as a means of enabling cricketers to keep fit during their off-season. Incorporating elements of soccer, rugby, Gaelic football, and an Aboriginal game called Marngrook, Aussie rules is a way of life for countless Australians and many other nationalities around the world. Formerly the Victorian Football League (VFL), the Australian Football League (AFL) is now the premier competition for the sport nationally, and the world-famous Melbourne Cricket Ground (MCG) hosts the AFL Grand Final every year. Test yourself to see how much you know about this uniquely Australian sport.

You have {{ vm.secondsPerQuiz }} seconds to answer each question. The faster you answer, the higher your score. When you're done, try again to beat your best score!
Facebook Twitter
? Neale Cousland/Shutterstock.com
:{{vm.state.secondsLeft|fixedLength:2}}
QUESTION {{(vm.state.currentQuestion + 1)}} of {{vm.questions.length}}

Science
Man-Made Birds in the Sky